Excerpt: The Art of Three – Jamie and Nerea discuss what has been lost

Posted on January 29, 2017 by Racheline Maltese

Erin and I often say that we’re witches. Among other reasons, we say this because our books always know what’s going on in our lives and the world before we do. This hasn’t necessarily been more true of The Art of Three than other books, but it’s perhaps been more poignantly true.

One theme that emerged in the book, that we didn’t even notice until the second or even third draft, was that each of our main characters has a personal history and community they are cut off from by the fallout of systemic violence. 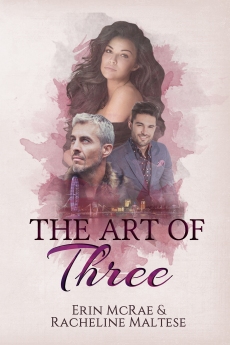 Jamie’s father, it is mentioned in passing was a Magdalene laundry baby adopted out. Jamie frets about wanting to know more of his lost grandmother’s history while being aware it would hurt were he ever able to find it out.

Nerea tells the story of being from a converso family and being raised Catholic but with traditions she didn’t know the meaning of until she met her husband whose grandmother was Jewish and whose history his own father would have preferred he forget.

Callum, a bisexual man, in a key moment waves off a mention of former lovers, noting they are all likely dead. Jamie, 24, doesn’t understand. “It was the 80s,” Callum says, and then says nothing else.

This book is the happiest, warmest book we’ve ever written. It’s got tons of weddings and engagements and HEAs and happy families of all types. But somehow, this story that we started in 2015, and finished the first draft of in January 2016, insisted on these few lines and pages about loss and how we go on and understand ourselves when our histories are taken from us.

At the time, we were like “Wooo, look at us with patterns and themes.” Today, we’re like,”Oh shit, why can’t we be happier witches?”

If I weren’t editing something else right now, I’d probably reread it this week.

Below is a scene from the center of the book. After Nerea has told Jamie about her own family history earlier in the day, they have this conversation that night in bed. Spoilers of course.

That night after they had gone to bed, Jamie stretched out under the blankets that covered them both now that the evenings had grown cool and said quietly, “I keep thinking about those candlesticks.”

“Ah?” Nerea had been on the edge of dropping off, but Jamie apparently wanted to talk, so she rolled over to face him. He had his pillow bunched up awkwardly under his head, and the moonlight fell across his face in pale streaks. He was frowning.

“I hardly know anything about my own family. I mean we’re Irish and Catholic — I know that much. But my dad was adopted — ”

“His parents, the people that raised him, are your grandparents,” Nerea said curtly before Jamie could get any further. Biology could be fascinating but was often overrated. Family was what you built.

“I know, and they’re great, but my dad’s mum, the one he was born to, she was in the laundries. I don’t think she wanted to give him up, and I wonder, sometimes, about cousins or aunts or uncles I might have and don’t know about. I have my mum’s family, of course, and none of it bothers me, but you can talk about a tradition of centuries, and I can talk about what’s lost. It felt weird, sometimes, when I was growing up.”

“It’s hard to be different.” Nerea knew enough to understand that the circumstances of his father’s adoption were likely fraught. Jamie didn’t spend a lot of time talking about his family, but when he did it was always with evident fondness. That was what mattered. “But you have plenty of stories to tell,” Nerea said. “A loving family that chose to be together. That’s good, and it’s more than many people get.”

“I know.” Jamie nodded his agreement. “I do know, but if I ever have kids of my own I’d want them to know their history. All of it — my father’s parents that raised him and the ones that didn’t. But finding any of that out would be hard. And it would probably hurt.”

The world was full of difficulties, Nerea wanted to tell Jamie. He only twenty-four, and there was still so much time for life’s lost and founds to break his heart. She wondered if she would still know him when he had children of his own; she wondered how much it would ache if she did. But now was not the time to sort that out, not within herself, and certainly not with him.

“It can seem hard to have lost history,” said carefully, glad they could barely see each other in the weighty dark. “But all families do. True, only some know it or the terrible reasons for it, but we do the best we can. We make new traditions, and we go on.” She touched a finger to the tip of his nose. “There’s a freedom in that,” she said. “Choose wisely.”