John Lyonel, a long-time theater professional and teacher, heads to Virginia to play Oberon in the Theater in the Woods’s production of A Midsummer Night’s Dream, intending to focus on his work. John is recovering from the tragic loss of his family and needs a break. The last thing he expects is to become captivated by Michael Hilliard, the professional actor playing Puck, especially since John has never been attracted to men, let alone one so much younger.

They rush headlong into an affair which falls apart dramatically over secrets that John and Michael are keeping from each other. A steep learning curve, the gossipy cast of the show, and the sometimes sinister magic of the woods conspire to keep them apart. But stage lights and stars might work their magic and help them define a new future. 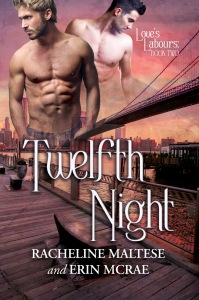 Michael and John, a May/December couple, navigate the repercussions of their gay-for-you love affair in the hothouse of a summerstock theater production.

Back in New York City at the conclusion of their show’s run, John is overwhelmed by his obsession with Michael and the difficulties of learning to date again after the death of his young son and his recent divorce. John gradually comes out to his colleagues, his football rec league friends, and even his ex-wife.

But when he invites his parents over for Christmas to meet the person he’s been seeing, the holiday—featuring Michael’s family’s amateur production of Twelfth Night—quickly turns into a French farce of potentially catastrophic proportions, forcing John to finally take the lead in claiming his evolving identity as he takes the next step in his relationship with Michael.