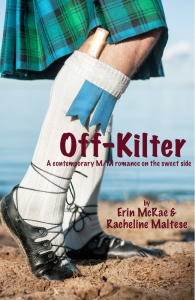 When Eric attends a Scottish Country Dance class with his friend Amara to help her hook up with her crush-of-the-month, the computer science grad student instead finds himself lusting after their very patient dance instructor, Rob.  While Eric swears he’s not just interested in how great Rob’s legs look in a kilt, that doesn’t stop him from scoping out Rob’s Facebook page and following him to the local Highland Games, in hopes of scoring a date.