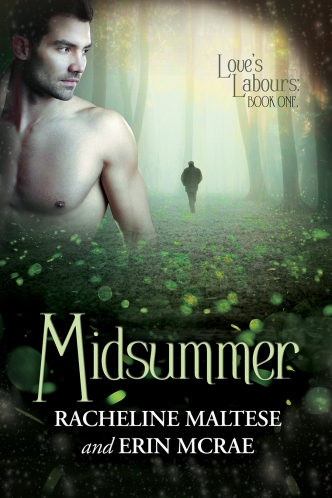 “Fans of sensual, romantic stories will love this one …. This is incredibly well-written and nuanced; it’s simply marvelous.”
– Inked Rainbow Reads, 5*

“A lushly worded book, filled with romance and characters that leap from the page. One of the best M/M reads of the year so far!”
– V.L. Locey (author of Two Man Advantage), 5*

“The writing, as always, is flawless, and almost poetic in some parts. Definitely a very enjoyable read, that … packs a lot of emotion and love into it.”
– Bayou Book Reviews, 5*

Lush, funny, magical, and a little bit morbid, the Love’s Labours series chronicles a romance between two actors who meet during a summerstock production of A Midsummer Night’s Dream.

Sure, 42-year-old John Lyonel has never been attracted to men before, but falling for 25-year-old Michael Hilliard is actually the least screwed up thing that’s happened to him in years.

Even if sometimes he thinks Michael’s a changeling.

(Please note, this is a first-time bisexual story for one of the characters and involves processing of his identity. It’s not a “I’m straight and your the exception” story, although the characters totally turn that topic over with some intensity).