A lot of the people who read this will have already been keeping up with the #BiMatters discussion on Twitter. In these recent weeks, the debate about representation in m/m fiction has branched off into several related discussions about author disclosure, the fetishization of gay men, and what kind of identities the characters in queer fiction can hold.

I’ve kept relatively quiet on pretty much all debate fronts, mostly because I have no horse in the Romance race. I write LGBT fiction, some of which has an erotic component, but I’m not publishing in the romance genre because my stories aren’t generally about two people who get together. But the central characters of every story I’ve published are queer, and since I plan to keep it that way, I feel like I have to address some of these issues in the m/m romance community because they bleed over into my sphere. And if I want to write a Happy Ever After someday, I want the community to feel mindful and open to my perspective, which it apparently isn’t. So I’m going to share my perspective. And maybe my view from the shallow end is a useful view of the pool.

I came into writing through fanfic. I’m 100% open about this in my professional life. In over fifteen years on the Internet I’ve written in fandoms of every size, Eastern and Western, for everything from children’s books to musicals to violent seinen manga. I’ve been in communities built around yaoi and slash, and communities that venerate gen and meta-, some that fracture and factionalize and some too small to break apart. I’ve been in fannish spaces dominated by cis straight men (and been assumed to be one, that was fun), and spaces created by straight women, and queer spaces, and the rare all-inclusive ones. But all of these fandoms have common behaviors, and chief among them is the acknowledgment of a canon. Whether you’re throwing it out the window for a firehouse AU or filling in the gloryholes the author left or curating a dossier of Jack’s one-night-stands, it’s hard to deny that something someone else created brought your community together.

I know I’m not the only person who started writing original fiction because of fandom, and how I think about writing has changed in that transition. For one thing, there is no canon anymore. I’m the author. I’m the showrunner. Nothing in my work is something someone else put there. Sure, it’s been edited (a lot), but I don’t have a producer insisting we need to appeal to a certain demographic, or a censor telling me there’s too much overt gayness, or an actor leaving for a new project whose character has to be put on a bus. There’s no arbiter anymore of what I can and can’t write without being a “good fan”, because I’m not a fan in this context. I’m an author.

But a lot of the mentalities of fandom are common to the original m/m community. Some of the good ones, of course: like fandom, m/m fiction is generally a queer-friendly space, and one where so many different people feel comfortable exploring their kinks and desires. It broadens the scope of fictional tropes by queering them. It has the potential to normalize and equalize social behaviors that other spaces condemn.

And the pitfalls of fandom crossed over with the perks.

Think of how slash fandom works, no matter the iteration: there are two men in a canon, and the fans turn them into a ship. To do this, the fans mine for justification and subtext, because usually, these characters aren’t declaring their passionate love for each other in canon. In fact, it’s likely that at least one of the men has a different love interest in canon, and that love interest is probably a woman. So what’s a slash fan to do? If you pretend the woman never existed, are you still writing fanfic for the series you claim to like? If you acknowledge that Dude A is attracted to her, does that invalidate his potential to pork Dude B? Back in the day, slash and yaoi fans bashed the living hell out of Relena, Rinoa, and Ginny because they got in the way. They couldn’t not acknowledge these characters, but thought they had to diminish them and their importance because their very existence impugned upon the m/m relationship. And I think that striving for perceived canonicity is a huge part of that: at any moment, the showrunner could throw a wrench into the slashers’ lovingly lubricated gears. Or, in a closed canon, a Dreaded Het Fan could crash the machine with a well-timed manifesto explaining why the authors themselves created this One True (Canon) (Heterosexual) Pairing.

Thank fuck the climate has changed, right? I mean, at least it’s not about canonicity anymore. Fandom has mostly gotten over the idea that the creators have descended from on high, and creators are also starting to include more non-het representation. Or trying, at least. But that same insidious misogyny has stuck around in fandom and original fiction alike, even if it’s changed its shape, because now we’re talking about how female characters in m/m fiction a constant threat of heteronormativity, and how bisexual characters aren’t gay enough to be considered progressive, and how m/m implies cis-m/cis-m and any vaguely vaginal anatomy makes it less queer. It’s the same story, rebooted for a new audience. It’s still discomfort with female characters and their potential to undermine a gay pairing.

And I get it. Believe me, I’ve been there. In some of my work, I’ve chosen to write about male characters because telling the same story with female or NB characters would make me personally uncomfortable. I’ve worried about the immediate perception of a female character as archetype and a male equivalent as default. My lead in The Backup is mixed-race, and I worried that people would think I was laying it on thick with a plot about the universe trying to “put him in his place” if I told his story with a non-white female lead. And I always, always worry about people accusing me of writing a story that’s too autobiographical, because I have seriously internalized that my story isn’t universal or even valid, because I’m female–and because mid-2000s fandom hammered home that if the story is about a woman, she’s Mary Sue, but that’s another essay.

So whatever conclusion the m/m romance community comes to, I hope it bears this in mind: if you think a woman is threatening to your homosexual pairing, consider why. Who is telling you that the woman is icky or dangerous or annoying or bitchy or insufficiently progressive? Is it just the voice of “how things are done here”? Is it the cis men who shat on you for being a pervert or a fujoshi or ruining their fandom with the gay? Is it the characters, trying to force themselves into a world where everything including identity is absolute and binary and formulaic and all knots must be conclusively tied or some phantom authority is going to leap out and say aha! he kissed a girl once, he can’t be in love with a man! canon! canon! canon! Or is it you?

And if you establish this standard in m/m romance–one of the biggest and most visible parts the LGBT lit community–what is it going to do to us on the fringes, trying to tell stories about the other letters in the acronym? Erica Kudisch lives, writes, sings, and often trips over things in New York City. When not in pursuit of about five different creative vocations, none of which pay her nearly enough, you can usually find her pontificating about dead gay video games, shopping for thigh-high socks, and making her beleaguered characters wait forty thousand words before they get in the sack.

She also has issues with authority. And curses too fucking much. 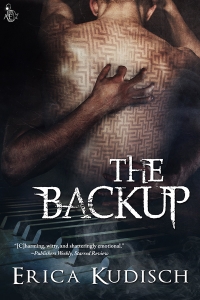 I’m supposed to be better than this. I’m supposed to have a tenure-track job teaching music history to undergrads, writing papers about Bach, and proving to kids like me that you can work your way out of Harlem. I’m not supposed to be following a rock star around the country, fetching his mail, making sure his groupies are of age.

I’m definitely not supposed to be sleeping with said rock star, who claims to be the Greek God Dionysus. At first I thought it was a load of crap. Nik’s fans might think his music captures their hearts—and souls—but I knew better. Until one of Nik’s orgiastic concerts gets out of hand and I don’t know which is worse: that he might be a god after all, or that he has a body count.

Nik doesn’t care what I want or what I should be. He wants to tear down the world I’ve built, warping all I am, until his music is all that’s left of me. I can’t let him do that. I shouldn’t believe in him. I’ve seen what happens to the people who believe in him.

But I can’t get his song out of my head.