Posted on September 1, 2015 by Racheline Maltese

Once each month, Erin and I send out a newsletter talking about recent releases, sales, and upcoming appearances. We also include a free story extra. These extras are either scenes actually excised from the books late in editing, or, in most cases, back- or side- stories we’ve alluded before and wanted to flesh out for our readers, or our own amusement.

This is first one is about the very early days of the Liam/Victor thing, set before the start of Starling. 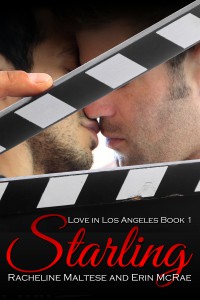 The pilot wrap party is long and ridiculous.  Victor doesn’t let masses of people into his home often, but these events are an exception — tradition and luck and thank you all at once.

Invariably, people stay over.  Someone passes out drunk in a lounger not too close to the pool.  Someone else takes a couch, and will hopefully vacate before the rest of the house wakes in the morning.  The guest bedrooms exist for a reason.  And when Victor retreats upstairs to his own room…

There usually isn’t someone in it.  But Liam has been
making eyes at him all night, and now they’re apparently going to have to have this conversation, which is more unappealing for the fact that it is late, and Victor is tired, and he hates other people in his bedroom.

It’s a strange conversation.  Because they’re both saying true things, and neither of them are reaching the other’s conclusions.  Yes, Victor thinks Liam is beautiful. That’s one of the reasons he cast him. Liam is telling him nothing he doesn’t already know, and that is not a reason Liam should be in his bedroom uninvited, And yes, Liam really wants the show to get picked up and for Victor to be his boss, and why that’s an obstacle to sexual awesome, he doesn’t understand.

That’s the thing that catches Victor off-guard.  Liam isn’t being awful, or obtuse, or pushy, or trying to get ahead by sucking dick.  He literally does not get it.  And not because of all the ways in which Victor isn’t exactly interested, but because Liam can’t thread the conversation in any way Victor thinks it’s reasonable to expect.

Neither of them are that drunk, either.

So they talk about it, and a lot of other things, for hours. Victor sits in one of the chairs by the window, and watches Liam — who doesn’t sit, but instead paces the room, from the sitting area, around the coffee table, to the bed and back, over and over — as they talk.

Liam’s strange, but not stupid.  In some ways he’s weirdly savvy. Late into it, they kiss, because Victor is tired enough for that not to seem egregious, and because he’s starting to understand — after watching Liam’s amiable pacing — that this strange young man can only figure out how to map certain things by using his body.

Victor does kick him out after, but only as far as his office down the hall with the rather excessive couch. The guest bedrooms are, unfortunately, occupied by now, and he wants to keep Liam close anyway. His filing cabinets are locked as a matter of damn course, but it still feels like an act of trust to leave Liam there with a pillow and a stack of blankets. Victor does not share his bed, with anyone, ever.  But tonight Victor is fond, and puzzled, and — if the show gets picked up — now very much owed the rest of this creature’s secrets.