There and back again: A Los Angeles recap

The most important thing anyone really needs to know about Hollywood is that the theater that hosts the Oscars is in a mall.

It even has an outpost of middle-America’s goth depot, Hot Topic.

Speaking of goth… despite the fact that my & Erin’s vampire duology, Snare is still a work in progress, I have to confess that vampire mythology is something really core for me in a way that very much relates to my experience of Los Angeles.

Say what you will about Anne Rice, but her The Vampire Lestat was how I learned that it was okay that I had emotions, and that the expression of them didn’t make me weird, bad, manipulative, or a liar. My father may have threatened me with exorcism for reading the book, but that book — and the idea of vampires by extension — saved me. So while it’s not a part of Rice’s vampire mythos, the idea of needing to be invited into a space is a superstition by which I have long lived my life and my ambition.

I have not, for example, ever taken a studio tour when in Los Angeles. For me, studios are places of work and of aspiration to the work; they are not places I go unless I am requested to do so.  I do not, and never have, given myself that permission, and if that makes me feel like I’m missing out (friends have had some pretty cool experience while on these tours), that’s okay.  It just makes me work harder.

So it was a little complicated when, on this recent trip, I attended two Paleyfest events at the Dolby Theater which, yes, also plays host to the Oscars. For Angelenos, the Dolby is just one of those places where you see concerts or attend other events.  For me, it was just weird.  Although as I rubbed my hand back and forth on the red velveteen of the seat, I felt nothing.  No magic, no frission, no regret… not even any static electricity.

Instead, I was sort of annoyed by the overzealous air-conditioning and preoccupied with where to go to dinner.  Tourist Hollywood is my least favorite part of Los Angeles, and I had to spend a lot of time there during this recent trip.  It did not make me fond; it did make me sad.  Like any big city, Los Angeles harbors a lot of hope and a lot of desperation.  Los Angeles just does those things differently than any other.

This trip was the trip where I fell in love with LA’s food culture, discovered the location of Alex and Gemma’s shitty apartment when they first move to the city, and found the nerve to swim in the ocean for the first time in years — largely because of the freakish heatwave that accompanied me to and from the city.  I also learned how everything connects. I’m a non-driver and assumed I’d get by as I usually do, with Lyft and Uber. But somehow, I did everything I needed to on public transit and now have this keen sense of the shape of life there, all mapped at the right angles of bus routes.

Without those bus routes, I would not have discovered the absurdity of Larchmont, which seems likely to be useful in the project Erin and I refer to as Secret House; or where, on the edge of Los Feliz, Minette (a character you’ll meet in the fourth book of the Love in Los Angeles series) likes to buy her 1950s-style dresses.  I wouldn’t have finally gotten to the Observatory; taken shaky video for Erin at Our Lady of the Angels; nabbed fairly mediocre macaroons at ‘Lette; or been able to drag my ass both to the WGA West library and Burbank on the same incredibly difficult and stressful day (scheduling fail, my friends, scheduling fail).

Unlike my last trip to LA, this time I didn’t cry when I left.  I didn’t feel desperate or sad or scared by the things the city arouses in me or the parts of me that 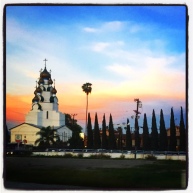 always get left behind there. And I didn’t feel ashamed by the gap — sometimes positive, sometimes negative — between where I am now and where other people expect me to be. This time, Los Angeles was just a place I go because I write stories, my own very much included.

So what was the magic weird serendipity that happened this time? I’ll confess, getting a yes on book 2 in our series with Dreamspinner while I was awkwardly standing in the middle of the Beverly Center was pretty amusing.  So was a friend sending me a link to this piece by Roxane Gay, when I returned — we were there the same weekend and clearly experienced some of the same pursuits and inconveniences (although her trip was notably more glamorous).

But, the really good stuff?  That would be telling.

I will, however, say this: If you ever need perspective on your dreams in order to stave off fear or force yourself to buckle down and work even harder?  Just remember that the Oscars are totally in a mall.  With a Hot Topic. And a California Pizza Kitchen.

Just take a right when you see the Sanrio and fly straight on ’til midnight.