It’s book birthday day for Kate Paddington‘s Platonic. Unlike a lot of the books I’ve posted here, I’ve actually had time to read this one in advance.  Since I know Kate off-line, I did tell her I wouldn’t review it, because that’s too weird, but I enjoyed it and you will enjoy it too, in part because it’s designed to appeal with an unusually wide variety of readers. 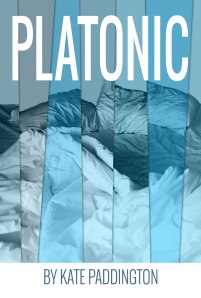 Mark Savoy and Daniel O’Shea were high school sweethearts who had planned their forevers together. But when Mark goes to college in California rather than following Daniel to New York, he embarks on a decade-long search for independence, sexual confidence and love.

When Mark lands a job in New York and crosses Daniel’s path, they slowly rebuild their fractured friendship through texts and emails. If they finally agree to see each other, will they be able to keep it platonic? Or will the spark of a long-lost love reignite just as Daniel accepts a job overseas?

My enthusiasm for this book is largely based in the way it contains both sweet and harsh relationships, without either being vilified, and I think that’s something uncommon to our genre that makes the book very truthful. Also, after you read it, you should pressure Kate to write a sequel entirely about Patrick and how he does life; I think he’s the bright shining light of this book and would be a great focus for an unconventional HEA story.  See?  I always have an agenda.

Anyway, Kate was gracious enough to write up a Your Mom! for us.  It’s a little different than some of the other stories here, but I think it’s an important one.  Writing, submitting, and releasing a book is a weird journey, and it impacts how you think of yourself and your interpersonal relationships, often in ways you can’t anticipate.  Kate writes:

My mom and I have never really talked, not once, not really, 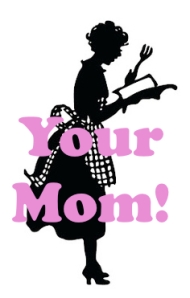 even though we’ve cohabitated for over a quarter of a century and manage to maintain an otherwise sitcom-cliché relationship. Somehow, somewhen, it became ingrained in me that impressing her and everyone else was the key to life itself and having honest, vulnerable conversations didn’t factor in. Of course, I’ve known for a while that all of that is silly, but shaking the habitual mindset hasn’t happened yet.

She coaxed me into a scientific academic career but then judged me ever since I was a teenager for my nerdiness, my complete lack of creativity and my aversion to sex. My other sisters were the adventurers, the ones who brought boys home and could paint and told mom their secrets.

So it came as quite a shock to her (to all of them, actually) that in the middle of a family dinner I plainly announced that in the month I’d just spent in America I had written a novel and that it was going to be published in a few months time. I was immediately teased for it because we are that sort of family but my mother was stunned. It took me weeks to get around to explaining that it was fiction (wholly unexpected), that it was a love story (utterly shocking), and that it was gay (pretty sure for a full fortnight this was considered my way of coming out).

There was a bit of a fight when I refused to let my elderly grandparents in on the secret and I ended up flinging my dog-chewed (that’s another story), dog-eared advance paperback copy in my mother’s direction. She read it a month later and I am yet to figure out why it took her so much time. When she was done she sent me the longest text message she’s ever sent me and said some of the nicest things she’ll ever say to me. She called me an excellent writer and said the story was powerful, that the sex was hot but that there was so much more than that. I do not exaggerate when I say that this was the closest we’ve ever come to ‘talking’.

The book hasn’t really come up in conversation in the month since that text message, although she knows it’s now been released. I have no idea if anything has changed between us or if we’ll ever talk about it again. But it was something: perhaps a moment of thinking I’d impressed her, or perhaps a moment of realizing that impressing her wasn’t as big of a deal as impressing myself. This by no measure is a completed story of sharing my writing with my mother, but it feels like it has been a pivotal chapter.

You can pick up Platonic in ebook or paperback from Interlude Press, Amazon.com, or your (e)retailer of choice.