Do you want to see Erin and Racheline make fools of themselves? 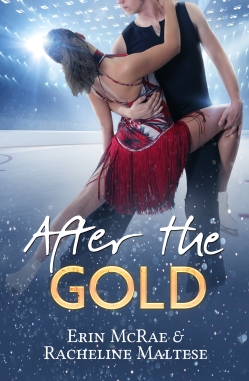 Why do we think this is going to be our most popular post ever?

Here’s the deal. We have After the Gold, a romance about Olympic ice skaters, coming out in June. Because writers like to think they are – or could be – experts on anything and everything, Erin and I are both losing the battle against wanting to take skating lessons.

We are not people who should ice skate.

Erin, despite growing up in Rochester, NY and going to university in Canada, has been on skates once. Meanwhile, Racheline was kicked out of her kindergarten ice skating class for being too scared.

Right now After the Gold has 139 marvelous magical pre-orders on Amazon. If we get to 250 pre-orders before release date, not only do we promise to go ice skating, we’ll provide you with video (and probably live tweeting until one of us skates over Racheline’s phone) of the hilarious disaster that’s sure to ensue.

For over a decade, world-champion ice skaters Katie Nowaki and Brendan Reid have been partners in every way but one. But now that their electric on-ice chemistry has led them to Olympic gold, they’re retiring from competition.

As they cross America on an exhibition tour with their fellow athletes, Katie and Brendan’s always volatile relationship becomes more turbulent than ever as they face down the media, their fans, and their increasingly nosy teammates.

When Katie realizes she wants to go back to the farm she grew up on, leaving Brendan behind in the city where they trained, their fairy tale seems destined to end.

But will Brendan be able to convince her to trust him with the off-ice intimacy that only spelled disaster in their past?

1 Response to Do you want to see Erin and Racheline make fools of themselves?