Will & Jane… and a short personal history of desire and shame

Posted on August 8, 2016 by Racheline Maltese 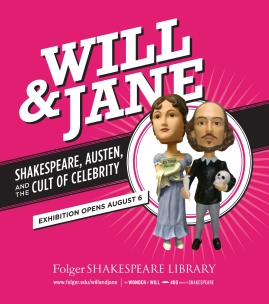 This past weekend, I was in Washington DC for the OutWrite book festival, which meant Erin and I absolutely had to go see the Folger Library’s Will & Jane exhibit, about the construction of celebrity around both William Shakespeare and Jane Austen.

Afterwards, I asked Erin if she wanted to write about it or if I should.

Except I don’t think this post is going to be very funny.

From the time I was a little kid, my parents have, periodically, asked me what I’ve wanted and then told me why I didn’t actually want whatever was contained in my reply. Cabbage Patch Kid dolls were just a fad, I didn’t really want that for Christmas, did I?  The other girls at summer camp may have worn sexy underwear, but I didn’t want to be sexy, did I? Boys with eyeliner were all the rage, but I didn’t want to date someone like that, did I?

From ice cream cones to vampire novels, my desires — or the very idea that I had desires at all — were always suspect. I learned early to stare at things I wanted with a quiet longing. If my parents noticed and found my desires acceptable, they might offer to get it for me; if they didn’t, I wouldn’t be mocked. I kept the things I desired secret and safe. I kept them as talismans. And I kept them as shame.

Which brings us to the Folger.

Will & Jane is a small exhibit that even the most exhaustive viewing of could hardly take more than an hour. It acknowledges, frequently and without further explanation, fan fiction and other forms of fan production, highlighting the degree to which these terms are now common both in daily life and in academia. Objects of fannish devotion are displayed throughout the exhibit and include everything from porcelain figurines of legendary Shakespearean performers to a Pride and Prejudice board game.

A lot of people were there to see the shirt.

Let’s face it, we were there to see the shirt.

Because when we heard about the exhibit, we went, “Well, this is funny. We should go. As romance writers, it’s our job.”

Also friends kept emailing us, so we kept having to email back: Yes. Yes. We know. The shirt Colin Firth wore in Pride and Prejudice. Yes, we’re going. Yes, we’ll tell you about it.

It’s a shirt in a glass case.

That’s it. That’s the whole story.

Except I couldn’t look at it. Like I can’t look at Cabbage Patch Dolls, lingerie, or ice cream, like I apologize for liking vampire novels and like I brace myself when my partner innocently and with all good intention asks me what I want for the holidays. Every year the question freaks me out a little less, but every year it’s still hard.

I am one of the hungriest people you’ll ever meet. Ambitious, driven. I want constantly and am considered peculiar for it often. But where I have found courage to talk about my ambitions despite what people think of ambitious women, I still largely lack courage to discuss my desires. Or really do much more than look, quietly, while hoping no one will notice.

Will & Jane is lovely and very funny exhibit about everything I care about — stories and marketing and the construction of fame and about how there’s really no meaningful divide between high and low culture. But it mattered to me mostly because it reminded me why romance novels matter.

They are about desire as it has so often been forbidden to us as women, as queer people, and as other marginalized identities that so often don’t get to desire and be desired if that desire and desirability doesn’t fit neatly into a white, male, heterosexual, cisgendered, able-bodied gaze.

I’m 43 years old. I’ve sold five romance novels and over a dozen romance novellas and shorter stories. I’ve been a sex worker and a model and a dancer and an actress. I’ve been looked at for a living. I’m even naked in a film with Nicole Kidman, so my ass was once made of light and dust and glowed on the big screen in movie theaters across the continent and beyond.

But I am still learning that it’s okay to want and that I don’t have to watch TV through my fingers or with a growing sense of dread if I find someone or something on the screen desirable.

And the only reason I continue to learn that it’s okay to look and to want and to talk about it is because of Romancelandia and the giddy women that populate it and fannish moments and events like Will & Jane.