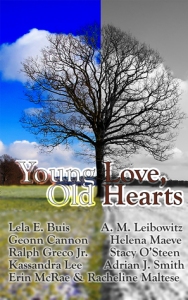 Day Three of our Young Love, Old Hearts posts. Today’s guyest is A.M. Leibowitz, author of “The Artist as an Old Man.”

I always say that I don’t read or write historical fiction. That’s not strictly true, of course. I’ve read some I like very much. Until now, I’d never tried to write any.

My original story for Young Love, Old Hearts was a contemporary guy-meets-guy story. I was almost done with it when a different idea struck me, and I went with it. But what does one do after an opening about two men dealing with aging and long-term care? I mean, that’s hardly romantic, even though there’s great love in caring for a partner of many years.

I chose to write the middle—the interlude—as the memory of their meeting. It honestly made me laugh when I realized that the 1980s are officially a historical time period—just not one with covered wagons or corsets.

Having grown up in the ‘70s and ‘80s, I’m reluctant to admit just how “historical” that era is until I meet people who weren’t even born when hair band power anthems were a Thing. I was only just coming of age in the late 1980s, but even I remember a lot of pop culture from that time. Most vividly, I recall my mother telling me I couldn’t have jelly shoes because they would ruin my feet. I also remember wearing lace gloves and an arm full of jelly band bracelets, collecting Garbage Pail Kids cards, getting my zombie groove on with “Thriller,” and learning all the words to Dire Straits’ “Money for Nothing” (I can still sing them for you, if you like).

None of that appears in my story.

Sad but true—I was working with adult men, so I was fairly sure they wouldn’t be sneaking the forbidden Bonne Belle lip gloss home from the corner drug store or teasing their hair into a hot mess with AquaNet. I did manage to squeeze in a few decent references to the decade, though. I’m only partly ashamed to admit I had to look up what kind of camera my character might own—I wanted to be specific. Turns out I actually owned that exact model. There are some other nice tidbits in there for readers who care to spot them.

I’m a stickler for things making sense to the period and age of the characters, so for such a short story, it required intense research and more math calculations than I typically do in an average week to get their ages and dates correct. I had to know if it made sense for my character Aaron to have come to the U. S. as a child, whether he could then have served in the military, and precisely how old he would have been at every stage. I had to know similar details about the much younger character, Kenny, as well.

In the course of researching, I learned a lot of things I hadn’t previously known, such as what it would have been like for a German-Jewish immigrant in the 1930s. I spent more time figuring out what their life experiences would have meant for the characters than I did actually writing the story. In the process, I discovered that it’s incredibly rewarding to write something historical.

“The Artist as an Old Man” isn’t anywhere near a fun trip down memory lane to the era of big hair and bigger shoulder pads. It’s a memorial to the people who lived through the decade with a lot less campy fun than some of us were having and a tribute to people in my own family who led complicated lives during the preceding decades.

I won’t say that I’ll do it again soon, but I’m no longer averse to crafting a story that isn’t set in our modern world, and it certainly opened me to the possibility that not all historical fiction must take place pre-twentieth century or even pre-1950s. Writing it gave me a taste of what it’s like to take a trip to Sometime Else for a while, and I’m glad I did it.

The negotiation had been scheduled for three p.m. on Wednesday. Mr. Rubenstein’s neighborhood was a bit challenging to navigate, and Kenny arrived at two minutes past the hour. He knocked on Mr. Rubenstein’s door, his stomach in knots at meeting the artist himself.

When the door opened, Kenny was met by a short, muscular man with dark hair, graying at the temples. He looked far younger than his fifty-three years. He had a long, sloping nose and John Lennon-style glasses. His face dissolved into a deep scowl, and Kenny sucked in his breath, stepping back a few paces.

“You’re late,” Mr. Rubenstein snarled. “Come back tomorrow, and if you show up on time, I’ll consider letting you in.”

He slammed the door, leaving Kenny standing on the stoop, staring. Malcolm was going to kill him, and then he was going to fire him. He might bring him back from the dead just to do it all over again. Kenny gripped his hair in his hands. Nothing for it but to go home and call Malcolm. At least Mr. Rubenstein had left room for him to try again.

Which ended up being exactly what Malcolm told Kenny to do, right after he threatened to not only fire him but put him on the three a.m. trucker shift. Malcolm didn’t explain how Kenny could do that if he were fired. Not in the mood for either outcome, Kenny promised to be on time the next afternoon.

Find me on the Internet:

Everyone hears “He’s too young for you.” “She’s too old for you.” Not between these pages. This anthology crosses the age gap with nine enchanting stories of cross-generational relationships. Some are sweet, some are sexy, some are heartbreaking. One is downright murderous. The protagonists are gay men or women searching for true love or trying out what’s right in front of them.

“Verso and Recto” by Geonn Cannon
Discovering their mutual love of reading leads a literature student and her professor to take a step neither of them expected.

“A Blizzard’s Blow” by Adrian J. Smith
Lollie dashes from the house in the middle of a blizzard in search of something she’s not sure she’ll find, but she hopes to never again see the same cold, blank stare Kimberley gave her.

“Slice” by Ralph Greco Jr.
When Germane relinquishes her more-than-slight kinky relationship with Lila to begin a new one with younger A.J., she finds a flirty, fun and wholly different “Slice” of life opening up for her.

“That December” by Lela E. Buis
Celia finds that older women and the politics of genetic engineering aren’t what they seem.

“The Arrangement” by Helena Maeve
When he is summoned into his Dom’s study after a mutually satisfying scene, Cyril knows he’s in for something worse than the play they normally get up to.

“New York Minute” by Stacy O’Steen
Stuck in his depressing hometown for far too long, Colton jumps at the chance to return to his beloved New York City. But when some odd coincidences click into place, he needs to find the truth hidden in the lies.

“The Artist as an Old Man” by A. M. Leibowitz
1985 is a big year for Kenny Anderson. Sent to interview artist Aaron Rubenstein, making a grand reappearance after a three-year absence, Kenny digs beneath the surface to understand Aaron’s life—and maybe his own.

“Adjunct Hell” by Erin McRae & Racheline Maltese
Phil may be in his 50s, but he’s still a student, and the fact that Carl—who’s barely 30—is dating him would bad enough even if Carl wasn’t waiting for good news from the tenure committee.

“Say You Do” by Kassandra Lea
Keegan Bancroft is hoping to avoid a complete meltdown before his date. But there’s something he really wants to ask Richard.

Supposed Crimes, LLC publishes fiction and poetry primarily featuring lesbian characters and themes. The focus is on genre fiction–Westerns, Science Fiction, Horror, Action–rather than just romance. That’s how we set ourselves apart from our competitors. Our characters happen to love women and kick ass.

“Supposed crimes” refers to the idea that homosexuality is outlawed, and that our authors are being subversive by writing. As times change this becomes more tongue-in-cheek, but can still apply broadly to our culture. Christians writing lesbians and men writing lesbians are also subversive ideas in this industry, and we promote people bending the rules.