A few things you might not know about Doves

Posted on February 1, 2015 by erincmcrae 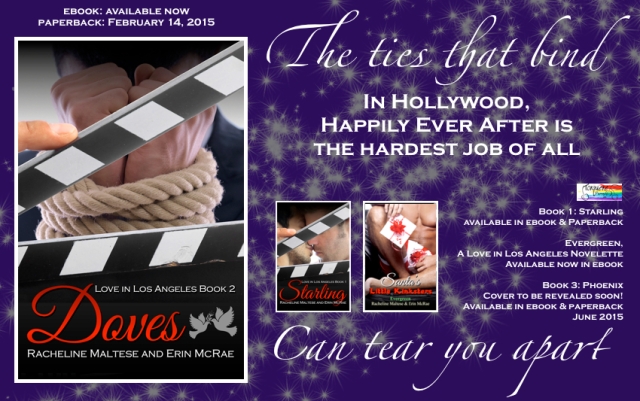 Give us a little insight into your main characters! Who are they?

None of them are easy people. All of them are a little bit broken. Alex, our protagonist (we hesitate to use the word “hero” — neither of these men exactly fit the romance hero mold), became a TV star overnight; he’s still learning to navigate fame and adulthood. In Doves he’s 22, ten years younger than his boyfriend Paul, and is still working on the idea that being in a relationship doesn’t mean being owned. Paul, our other main protagonist, has workaholic tendencies that have doomed his relationships in the past. Now that he’s running his own show, he’s struggling to balance his work obligations and existing as a partner to Alex. Some of the other characters include a bisexual, polyamorous, former child-star, his fiancee, and his asexual boyfriend, who also happens to be Alex’s and Paul’s boss. These people were all supporting characters in our first novel, and while their role is still secondary to the main romance narrative, we were able to give their romances a lot more page-time in this book. We’re really excited to have an opportunity to show how different relationship styles and orientations work for some people.