Do the Thing! – On wanting to be rich, famous, powerful 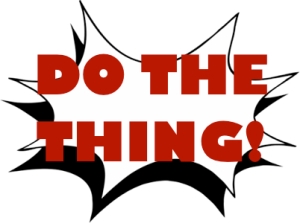 Once upon a time there used to be a piano bar in New York City called Rose’s Turn.  One of the employees there regularly performed a song called, “My Simple Christmas Wish” that’s better known as “Rich, Famous, and Powerful.”

The song is a favorite of performers because it’s all about venting — about how much you hate rehearsals, high New York City rents, your competition, doing the actual work to achieve your dreams, and pretty much anything other than stomping all over people.  It’s also hilarious.

It would be very easy to make a post about how you shouldn’t be the narrator of a song who says things like “I want to be rich, famous, and powerful / step on all my enemies and never do a thing” and “I don’t want to work, struggle, or compromise / when I set a goal I want to reach it right away / And paying your dues that’s just for other guys / I want what I want and I want it all today!”

But you know what, screw that.  Because sometimes we’re all the narrator of this song. Catty? Lazy? Vengeful? Irritable about the really hard work we actually do put in all the time?  Yup.

And that’s okay!  If you manage it.  If you exercise some discretion.  If you know you’re being a little bit awful.

So many success narratives are about how you have to be a perfect, nice, grateful, humble person all the time to achieve your dreams.

Well, guess what?  That’s really hard.  And the pressure to never screw up?  Really toxic. Having to be nice all the time can make you a massive jerk really quickly.

So here’s my advice:  Obviously, don’t actually be a jerk to other people.  And if you are, work on that, and apologize when it happens.

But do find that friend you can vent to, who can hear your awful things and let you get it out of your system.  And when you find that person who has agreed to this function in your life? Complain about having to do a seventh draft of that new book!  Or that frenemy who always gets the part that you want!  Or that writer you know who sold their very first spec script!

If all else fails, rewriting the lyrics of “My Simple Christmas Wish” to fit your own ambitions and rage can be surprisingly cathartic.  And, hopefully, hilarious.

Like Loading...
This entry was posted in Do the thing! and tagged They Do. Bookmark the permalink.