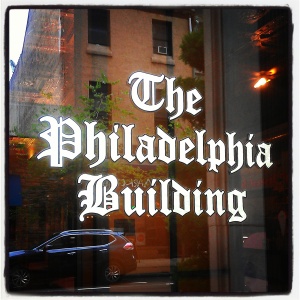 We’ve mentioned, from time to time, our writing office in Philadelphia. We were there yesterday, where we realized we hadn’t actually told the story of how the Philadelphia office came to be.

Racheline lives in NYC, I’m in DC, and everything we write (unless we’re working on publisher edits) we do in Google Docs, so most of the time we can work just fine remotely. But when we had finished the first draft of Starling, we wanted to sit down in the same room and flip through a physical copy of the story in order to do an intense editing pass.

So we found an office in Philadelphia, which is halfway between our two cities, and had the first of what would become bimonthly trips to work actually face-to-face. We made a lot of jokes about our Secret Literary Affair, because we didn’t talk about Starling before it got accepted, so we were basically sneaking up to another city to work on our stuff for several months. (We’re still not sure if anyone actually thought we were having an affair – Racheline did once have an affair in Philadelphia, a few blocks from our current office, but years ago and not involving me!)

Having the office space, even just two days a month, is great. There aren’t any distractions (frankly, even though we usually work in a tiny side-office with a door we can close, we’re probably the most distracting things in the space, since we tend to forget how loud we’re talking when we’re breaking stories and trying to figure out where the sex goes. So uh, sorry, fellow office people.) There’s a whiteboard we can do brainstorming and visual story-mapping on. We can talk with our hands and convey the meanings and weird complex concepts to each other that we haven’t quite figured out the words for yet but [hand flap hand flap hand flap], you know?

There’s also something about being in a tiny room for an entire day, focused on a story or a world, that generates a kind of creativity we don’t really get elsewhere. And we are immensely creative over email and in google docs, but there’s something about Philadelphia that really is magic. Stories that we’ve struggled over putting the last pieces together in email for weeks, suddenly come together. Last night at dinner we had the brainwave that solved an entire novel outline we’d been stuck on.